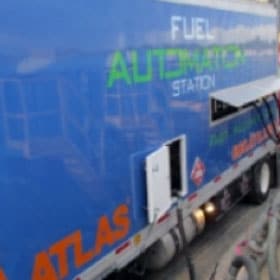 Since its founding in 1985 by Sam Simon, Atlas Oil Company has grown through technology, operational innovation, and an unwavering commitment to customer success. It's been an exciting journey, and I've learned a lot over the 20 years I've worked at Atlas, and from our leader Sam.

I've also learned from our customers – what they need, and what barriers they have to achieving greater success. It's good to get out of the office and to spend time in the field. I learn things I wouldn't normally see or hear in the day to day operations of our diverse business. Listening is how relationships are built and companies grow.

Those of us in the oil and gas industry remember well the 2015 downturn, which began early that year and lasted for nearly two years. Crude oil prices slid significantly from $80 a barrel, to $60 and even to sub-$30 levels. Additionally, U.S. shale projects and fracking, due to more costly extraction, were difficult revenue generators because of low oil prices. Consequently, the market was shrinking and companies – our customers – were laying off a significant number of employees. As a result, there was a hyper-focus among production and completion companies to improve their operational efficiency and safety performance.

Throughout our history, Atlas' business has grown exponentially in major downturns through investments, business model innovation and calculated risks. This is a core tenet of Simon Group Holdings companies, of which Atlas is the first. Consequently, in September 2015, we met with our customers to help identify their greatest challenges. Through these discussions we learned that oil producers ideally wanted a system – an efficient technology and delivery process – for "hot fueling" (fueling when engines are operational). Opportunity knocked and we answered!

Our customers said they would buy a product that did this. Atlas leaders and engineers went to work. The following month we began building the first unit. Each station has 20 hoses for simultaneous fueling, even during pumping operations, and is controlled by one technician from a remote command center, which is equipped with guided wave radar technology for real-time tank monitoring and fuel use measurement as well as diagnostic systems to identify equipment engine problems.

We delivered the first unit a year ago, in Feb. 2016. This month, we delivered the fourth unit. We have more orders from several different customers, and anticipate providing as many as 20 units by the end of the calendar year.

This proactive problem solving is how the Atlas team imagined, developed, manufactured and sold a technology solution to assist our oil and gas industry customers; and we did this in one of the toughest markets in recent times.Never satisfied, our team is adding additional capability to the FAS system. In partnership with Vixta Solutions, another Simon Groups Holdings company, we developed a cloud based platform to remotely monitor fuel operations by capturing live data. The platform is able to monitor thousands of data points per second – more than 500,000 readings per day! Subsequently, the data is captured, uploaded, and "packaged" into intelligent insights for operations and customers, even on mobile devices. Diagnostics includes critical sensor readings and the number of gallons per tank, which ultimately leads to predictive maintenance for optimal efficiency.

We're more than pleased that our FAS system has revolutionized the industry and is becoming an adopted standard. Importantly, we take great pride in having helped our many customers increase their output as well as helping to keep their employees safe. Their success is truly ours. My sincere thanks to our customers for their collaboration and trust.

This isn't the end of the story, however, soon we'll have more to announce. Meanwhile, we're listening to our customers and working to disrupt the industry.