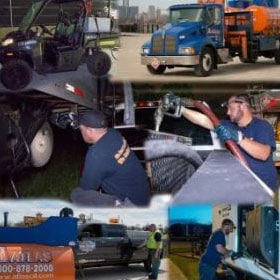 The 2015 Chevrolet Detroit Belle Isle Grand Prix is this weekend and the Atlas Oil operations team is ready! Our team has been working for months to make sure the event will be another great success! For the second consecutive year, our team has fueled the construction of the track as well as the infrastructure for the entire event including fueling generators for caterers and other major vendors on the island.

We are currently on site and fueling hundreds of generators, light towers and refrigerated reefers over the duration of the weekend event. We have a dedicated fueling team and several ATVs and other vehicles ready for action.

Last year, more than 110,000 attended the event – the highest recorded attendance in the race’s history. We are pleased to play such an important role in this event.

Fueling major events is one of our key capabilities at Atlas. We also fuel concerts at Comerica Park and DTE Energy as well as several events for the Barnum & Bailey Circus. Our diversified supply and logistics capabilities are available across the country