Atlas and CITGO to Help Drive Out Bullying – One School at a Time. 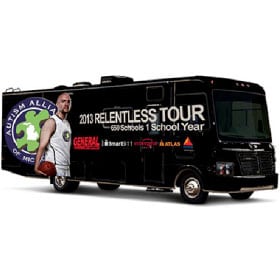 The 2013-2014 Relentless Tour: Ianni Project is a first of its kind grass roots initiative designed to help eradicate bullying across the state of Michigan. Atlas Oil and CITGO are proud to be driving this effort as the official fuel sponsor for this year-long, statewide initiative which kicks off on the steps of the Michigan State Capitol in Lansing on Thursday, Oct. 17.

Bullying is something that affects everyone in one form or another. Additionally, individuals with autism are one of the most targeted groups to be the victims of a bully with numbers ranging from 65-90%.

The Autism Alliance of Michigan's own Anthony Ianni, one of the most sought after anti-bullying experts in the state and across the country, has pledged to visit and spread his message to 659 middle schools in Michigan in 1 year.

The tour will begin October 17, at the Capitol in Lansing with Lt. Governor Brian Calley and MSU basketball Coach Tom Izzo at his side and will continue throughout the school year until every district has been reached. Additionally, Red Wing Niklas Kronwall will also be on board to help share Anthony and the Autism Alliance of Michigan's message.

At each school, Anthony will leave behind a plaque to remind students of their commitment to ending bullying.

Anthony's story is one that reaches everyone. Diagnosed with autism at a young age Anthony's parents were told he would never graduate, never play sports and likely have to live in a group home for his entire adult life. Anthony was bullied extensively as a child because of his autism and the fact that he shot up to 6’9″ at a young age.

Anthony defied all of the odds and not only graduated from MSU with a degree in Sociology but went on to be the first known individual with autism to play college basketball. During his time on the team, he played in two Big Ten Championships and a Final Four.

For more information on this worthwhile project, or to pledge your support, visit relentlesstour.com