Atlas Oil remains open throughout Michigan's "Stay Home, Stay Safe" Executive Order as an essential business operation. As we continue to monitor COVID-19, the safety of our customers and team members is our top priority. Atlas will continue to post updates on our response to COVID-19 here www.atlasoil.com/COVID-19

A Day in the Life of Atlas Transport Drivers

Learn what it means to Be Atlas Awesome from two Atlas SEALs, Safe Educated Atlas Leaders, Michael and Robert, as they discuss a day in the life of a Transport Driver with the Atlas marketing team. 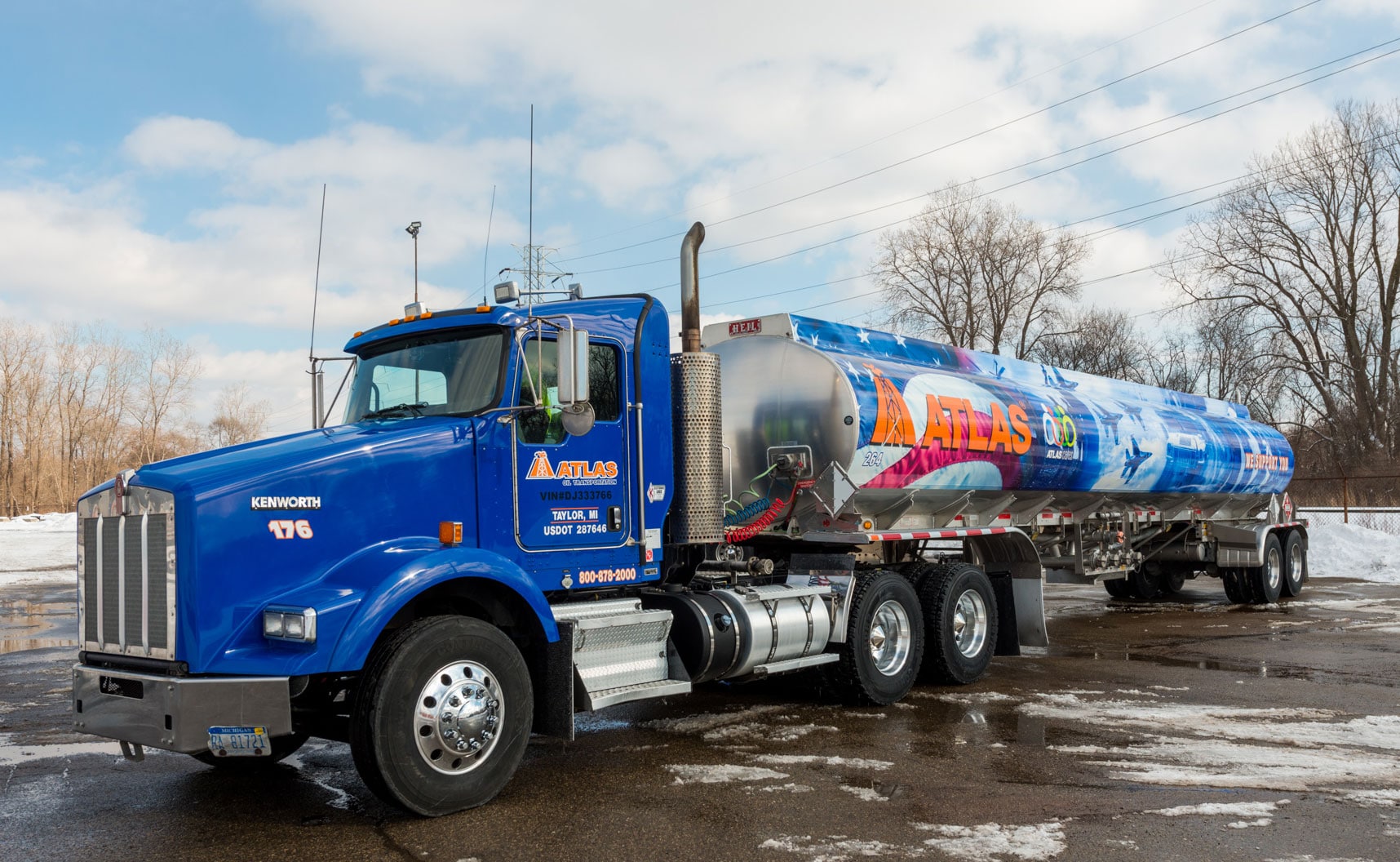 Every shift as an Atlas driver starts with a thorough Pre-Trip Check. These can take anywhere from 20 to 30 minutes to complete and include checking axels and wheels, thoroughly cleaning placards and windows, ensuring all lights and horns work, and a complete “head to toe” check of the tractor and trailer.

“I like to do my pre-check like my life depends on it,” Michael said. “It’s my livelihood.”

“We spend a lot of time in these trucks, so it’s important to take care of them,” said Robert. “I like to make sure that everything is in working order and clean before I start my day.”

After the Pre-Trip Checks and talking with the logistics team about potential route changes, it’s time to hit the road. The first stop of the day is at a nearby fuel rack to load diesel. Before loading, both drivers carefully put on their safety goggles, hardhat, and safety vest and climb out of the truck to check the tires and trailer one more time before rolling into the rack to load.

While waiting for almost 12,000 gallons of on-road diesel to load, Michael talks about what brought him to Atlas.

“I always knew I wanted to be a truck driver,” he said. “Even as a kid, I loved seeing all the different trucks on the road. I was fortunate enough to be a part of the greatest military in the world as a drill sergeant for the United States Army Airborne Rangers for 20 years, and after retiring from the army made the switch to driving.”

Michael and Robert say the focus on safety, competitive pay and benefits, and people are what keep them at Atlas. As a veteran, Michael also loves the community service initiatives Atlas takes on to support military and first responders, like the annual Selfridge Air National Guard Base party and new “We Support You” trucks.

“I don’t think I’ve been anywhere where I’ve seen companies do what we do here,” said Robert. “Especially with the military, being raised in that kind of family, that’s something I think is awesome. The things they sacrifice for us, we could never fathom. I feel like a lot of people don’t recognize that, and I’m glad that as a company, we do.”

After loading the fuel, it’s time to hit the road again. One of the most astounding aspects of the marketing team’s ride along was how little space other drivers give fuel trucks.

“I think people forget what we’re hauling,” said Michael. “They seem to think I’m hauling milk and don’t realize that these heavy trailers are loaded with flammable materials. Cell phones have made distracted drivers that much worse.”

That’s why the Atlas Safety Team undertook the task of getting drive cams installed in every truck in every terminal nationwide to ensure our drivers are being kept safe on the road and to learn if there are additional steps Atlas can take to keep our team safe.

“Safety is number one,” said Michael when asked about how Atlas views safety.

After arriving at the gas stations to deliver fuel, the drivers set out several cones to make sure everyone keeps a safe distance from the delivery.

“Unfortunately, we just have to assume that the general public has no idea what we’re doing, even though we’re a gas truck as a gas station,” said Robert. “It’s important to always stay vigilant.”

After carefully disconnecting hoses, strapping them back on the truck and doing one last job site inspection before picking up the safety cones, Robert had a message for drivers thinking about joining the A Team.

“I don’t know what you’re waiting for,” Robert said. “The room for advancement here too, where you don’t always have to do the same position for 30 years, is awesome. If you’re on the fence about joining the Atlas Team, I say jump over.”

There is no better way to learn about what it means to Be Atlas Awesome than to hop in the truck with a member of our frontline. Be sure to check out the interviews with Michael and Robert below. If you’re a driver thinking about joining the team, visit our careers page to learn about career opportunities in your area!